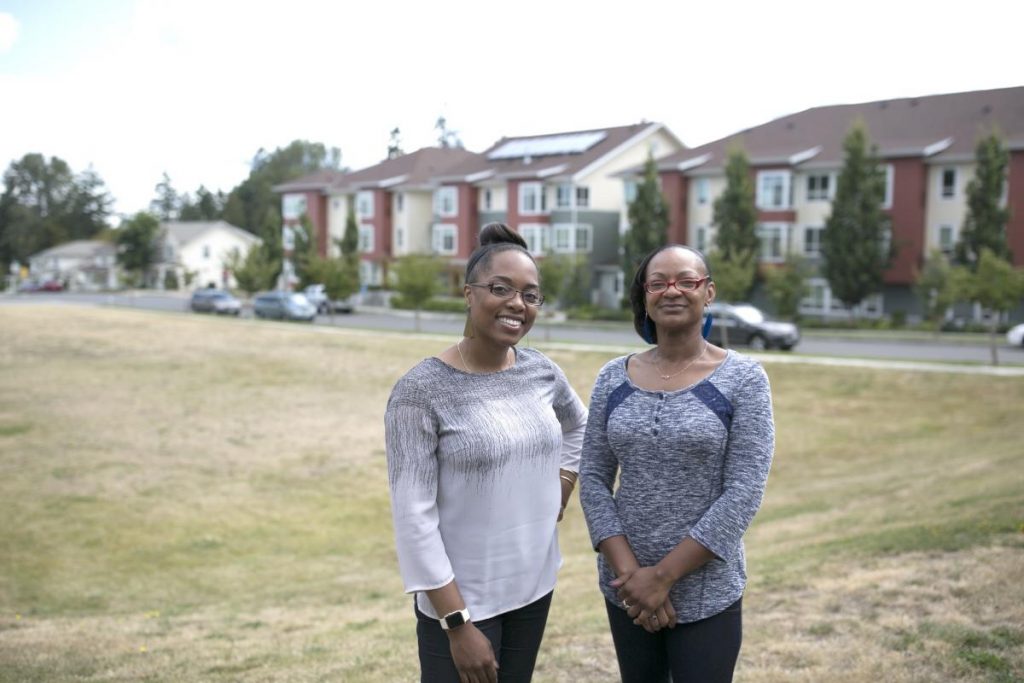 Rows of well-groomed houses, apartments with balcony gardens, community spaces, parks and a health clinic — all within walking distance of each other and right next to a 290-acre greenspace. Children play together in the streets, and romp through nearby Swan Creek Park.

This is New Salishan.

“It’s kind of like a giant playground,” said Andrea Cobb, program director for the Tacoma Housing Authority (THA), the nonprofit organization that helped create the development.

Born out of military housing and remodeled into an award-winning neighborhood in 2001, New Salishan (pronounced “Shalishan” by locals) is home to 1,350 mixed-income households.

Nestled between several schools, the neighborhood has a strong sense of community. “The look of the neighborhood has changed,” Cobb said, “But it’s always been this defined community with an identity of diversity, and those are some of the defining characteristics that people grow up with and remember.”

Despite the school district’s 83 percent graduation rate — five percent higher than the state overall — 43 percent of those kids weren’t going to college or any other post-secondary institution according to a 2016 Graduate Tacoma report.

Rhonda Gallert, the mother of a kindergartner who attends New Salishan’s Lister Elementary School, said the road to post-secondary education can seem like a long, dark tunnel.

“As a low-income, single parent, I’ve had those thoughts, wondering how am I going to pay for my kids to go to college,” Gallert said.

For parents like Gallert, the Tacoma Housing Authority (THA) started the Children’s Savings Accounts Program (CSA) as a part of their Education Project, a program developed to promote the success of children in THA housing and the schools they attend. New Salishan serves as an incubator for the project, which launched in fall of 2015 and has potential to spread citywide.

Students use the funds earned in the program for both the tuition and non-tuition costs of a qualified post-secondary educational program, such as a four-year university, community college or trade school.

The program begins in kindergarten, when THA opens a savings account in a student’s name and deposits $50 upon their enrollment at Lister Elementary School. THA matches the family’s deposits up to $400 per year through the fifth grade.

In tandem, THA is working on implementing a financial literacy curriculum for Lister Elementary students and financial training for parents.

The next stage of the program begins when students enroll at First Creek Middle School. The newly minted sixth graders and their counselors create individualized plans to take them through high school and a qualified post-secondary educational program.

They set milestones to hit along the way, mainly of academic nature. These could include GPA goals, applying for Washington’s College Bound scholarship, taking the SAT and applying to colleges. Upon hitting a milestone, THA will make a deposit into the account, up to $700 per year.

Students who max out these contributions from elementary school through high school will graduate with a balance of $9,700. This balance can be accessed only if the student graduates and enrolls in a qualified post-secondary educational program.

Gallert found out about the CSA program when she registered her daughter for elementary school last fall.

“The program really just seems like the light at the end of the tunnel,” Gallert said. “With this CSA program and getting more parents involved, I think they’ll see this will lift some of the burden off their shoulders.”

With its discrete geographical boundaries and strong community ties, New Salishan was the perfect place to test the program, Cobb said. Even if it’s in the growing stages, the program is not meant to be small.

Cobb said the CSA project originated from the realization that students eligible for the Washington College Bound scholarship, a program for early commitment of state financial aid to eligible middle school students, weren’t signing up for it as much as they could.

This scholarship covers tuition at public colleges, some fees and a small book allowance.

“This program came as an evolution of thinking about what we can do to help close that gap of nontuition costs that prevent a lot of students from still not going on to college,” Cobb said. “It really came from people wanting to solve a problem, and that problem is that higher education is not affordable.”

So, THA started working with the Corporation for Enterprise Development (CFED) to create a program that would address the problem at hand.

“There’s also a ripple effect,” Cobb said. “If you have kids that are getting good grades and taking difficult classes, who are also low-income, they become super competitive for other scholarships and financial aid.”

The CSA program not only aims to make college a financial possibility, but also to help students feel prepared to take on upper-level education.

“When you are consciously taking steps to be college-ready, you graduate with a college-going identity,” Cobb said. “You don’t graduate with any doubt about whether or not you should be there.”

As of July, there are 43 families participating in the project with room to grow to 80 elementary through fifth graders and 60 middle and high schoolers per year.
Parents can enter their children into the program either in elementary school or in sixth grade with a simple one-page sign-up sheet.

“We wanted to make sure the application wasn’t a barrier, we made sure to use inclusive language and only ask for the information we need,” Cobb said. “The families are it. They’re the best partner you can have in trying to meet education goals.”

Michael Mirra, executive director of THA, said he sees the program expanding to a city-wide operation. The average cost per year is about $500 per child, which is 3 – 4 percent of one year of public education.

There are plans to build an extension of Heritage Bank, the partnering bank in the program, in New Salishan.

That way, as kids are walking to class, they see a visible representation of their hard work.

Gallert’s daughter, who is now in the first grade, has already started investing in her future.

She has a piggy bank at home that she puts money into, saving up to deposit in her bank account.

“I hope when she graduates, she knows that it really took a village to get her there,” Gallert said. “It wasn’t just me, it was all of these other hands and the generosity of the funders of CSA that helped her get there, and hopefully that will stick with her to give back to the community when she is in that position.”

Children’s Savings Accounts (CSAs) are long-term asset-building accounts, established for children as early as kindergarten. Accounts are seeded with an initial deposit and built by contributions from family, friends and the children themselves.